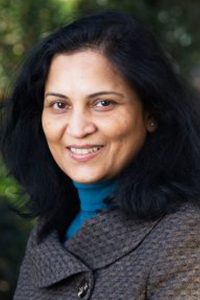 Sovereign Health’s Chief Scientific Officer, Veena Kumari, Ph.D., C. Psychol., AFBPsS, spoke on a recent “In Your Right Mind” radio broadcast titled “The Science of Happiness.” An internationally recognized leader in psychiatry and neuroscience, Dr. Kumari shared her expertise in this interview that explores the science of happiness in an effort to help the people who read it achieve happiness in their own lives.

Q: In your radio interview, you explained how there are different types of happiness, “baseline l happiness,” which is a general ongoing trait, and episodic happiness, which is generally a response to positive internal or external stimulation. During the process of learning and memory formation, is the brain able to discern one type of happiness from the other?

A: Well, yes and no. Experiencing happiness in any form is likely to involve the nucleus accumbens and associated reward structures of the brain to a varying degree. The involvement of these and other brain areas, however, depends not only on valence but also on the level of arousal induced by any stimulation. Interestingly, these are the areas that also mediate addiction. The reward system consists of a set of structures, receptors, neurotransmitters, electrical balance of ions and signaling patterns. All of these components are influenced by genetic expression, nutritional status, disease states, psychoactive substances, sleep status, oxygenation, hydration, level of consciousness and many other factors.

So many things determine how a person feels at any given point in time. However, the body is constantly striving to achieve and maintain homeostasis (or balance), so the idea that an unhappy person might be drawn to things that brought immediate gratification in the past would be a logical one.

Q: So the human brain is vulnerable to addiction by definition, then?
A: It depends on past experiences, exposure to addictive substances, certain personality traits consistently associated with the level of baseline happiness, and so forth. Activities other than using psychoactive drugs can also stimulate the reward center and form addictions. Sex, exercise, gambling, romantic love, meditation can all be rewarding, as well, due to the immediate neurochemical response such activities induce.

Genetic composition and expression also influence addictive behavior. Those with certain variations in the D-2 dopamine receptor gene associated with low dopamine, which is approximately one third of the population, appear to be predisposed to addiction. One theory is that those with less dopamine or fewer binding sites experience chronic unhappiness and, therefore, tend to “self-medicate.”

For the most part, positive emotional processing bias should result in healthier adaptation to stressful life events. In fact, one of my recent studies has demonstrated an absence of fear processing bias, and instead a trend for preferential processing of happy faces in a group of resilient adults who had suffered abuse as children.

There are many things people can do to cope with stress. Consciously thinking positive thoughts, practicing meditation or receiving cognitive behavioral therapy are a few ways to do so.

Q: Are there any other things people can do on a regular basis that can help restore and maintain happiness?

A: Well, not everyone has a high level of baseline (trait) happiness, and even those who do are unlikely to feel happy all of the time. But yes, there are things people can do to improve their happiness and well-being. The nervous system and the body in general require certain basic things to achieve and maintain neurobiological homeostasis (or a balanced brain). These include things like getting enough sleep, eating right and exercising.

When the brain has the rest, nutrients and oxygen it requires, it is less prone to bouts of depression, anxiety or cravings for unhealthy things to stimulate the reward center. Developing healthy lifestyle habits is essential for recovery from addiction and mental illness, as well as for happiness in general.

Veena Kumari, Ph.D., Psychol., AFBPsS, is an internationally recognized leader in the fields of psychiatry and neuroscience. Dr. Kumari obtained her Ph.D. in psychology from Banaras Hindu University, India, in 1993 before moving to King’s College in London. There she most recently served as the professor of experimental psychology at the Institute of Psychiatry, Psychology & Neuroscience. She has been recognized for her research on the neurobiological and behavioral effects of psychoactive substances, schizophrenia, violence, addiction, personality traits and brain functioning. She is also a highly respected teacher and mentor of the next generation of social scientists and neurobiologists.