Interview: Peter A. Levine, Ph.D., talks about how we’re all united in how we respond to trauma 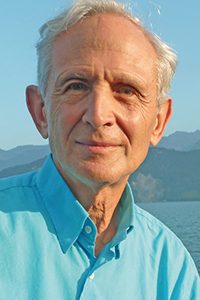 Peter A. Levine, Ph.D., founder of the Somatic Experiencing Trauma Institute in Colorado, was one of the guest speakers on the Jan. 15 “In Your Right Mind” radio show, which addressed trauma. We spoke to Dr. Levine about the different types of trauma and how people can react to them differently.

Q: First off, what is trauma?

A: The definition of trauma that we use now – PTSD – that really didn’t occur until 1981. And I look at trauma as something that at the time was perceived to be overwhelming or threatening. “Perceived” is kind of the keyword here, as something that might be overwhelming for someone at a particular age might not be for another person at a different age. It really has to do with whether we perceive something as life-threatening. There’s not a simple answer.

Q: Is post-traumatic stress disorder (PTSD) the only form of trauma disorder?

A: No. I see that as being the tip of the iceberg. In the classical definition, trauma is about what are called intrusions. Hypervigilance, hyperactivity, an inability to wind down to sleep … getting flashbacks. The physical [symptoms of trauma] are much less apparent, more hidden.

Q: What is somatic experiencing, and what makes it different from other methods of treating trauma?

A: “Somatic experiencing is an approach I developed over the past 45 years. It’s really about what the body does. So, for example, if we see something horrific, we gasp, we tighten our guts. We retract our head and neck, and so forth. These are all things the body does, and in order to move out of trauma, the person has to be able to experience physical sensations, which actually contradict those of overwhelming hopelessness. [Somatic experiencing] helps people get new experiences, which contradict the traumatic experience. It’s really about having new experiences.

Q: How can somatic experiencing help treat traumatic disorders such as PTSD?

A: Absolutely. Something caused by a natural disaster, it’s not personal. Now when trauma is caused by somebody who is supposed to protect us and care for us, and they do something that’s harmful, especially for young children, they attach. They go to the caregiver. But what if that parent is also the abuser? It sets up an untenable dilemma, because the instinct is to go to the adult, to be made secure and safe, but then the adult is causing the injury and causing the trauma. So these are some of the more difficult traumas to work with, so you have to work therapeutically with that, so the trauma can be healed within the relationship. Working with the trauma within the relationship is very important. Usually, when that happens there’s a lot of shame … people think they caused it. You have to untangle that. [Traumas caused by natural disasters] are not nearly as complex as those caused within the relationship sphere.

A: Yes, but also no. Women are more likely to experience incest, molestation, sexual trauma than men are, arguably. Women tend to be more … on one hand, they’re more in touch with their sensations than men, and maybe because of that they’re more susceptible to be overwhelmed by certain emotions. There are more similarities than differences, though. I would have to say we’re ALL united in how we respond to trauma.

Q: Does an individual’s personality play a role in how they experience trauma?

A: There are so many things that affect whether a person becomes traumatized or not. Undoubtedly, there are genetic [factors]. It’s important at what age traumas have occurred. A child may have an emergency room visit at a hospital, and they seem OK, but then as an adult they have to go to a hospital for some illness, and all of a sudden they’re terrified to go into the hospital or even see a doctor. These things can lay dormant and show up when we least expect them.

About Peter A. Levine

Peter A. Levine, Ph.D., is the founder of the Somatic Experiencing Trauma Institute. In addition to a doctorate in psychology from International University, Levine holds a Ph.D. in medical biophysics from the University of California, Berkeley. Levine has specialized in trauma and stress for over 40 years, and is the developer of Somatic Experiencing, a treatment approach that attempts to heal trauma and other stress disorders. Levine is also the author of “Waking the Tiger: Healing Trauma,” a best-selling book published in over 20 languages. In 2010, he received the Lifetime Achievement Award from the United States Association for Body Psychotherapy.